Which came first, the pastured chicken or the conventional chicken?

Well, technically, chickens have been around for a really long time. There is evidence of chickens in ancient Greece and Egypt well before Christ (5th Century B.C.). They likely originated in Southeast Asia. If you have ever spent time with chickens you might think of them as small dinosaurs based on their appearance and behaviors. Regardless, chickens were once wild, they were domesticated and now are an important part of our lives. The real question for this blog is, does how a chicken lives make a difference in the health and quality of its meat? Read on to find out about my investigation into this question.

What is so different about chicken raised on pasture, purchased directly from a farmer?

Allow me to paint a mental picture for you. Imagine walking up to the farm stand where Aaron of Jodar Farms, the farmer who raised the chickens, hands you your frozen bird with the same hands used to:

Aaron from Jodar Farms at the Boulder Farmer’s Market

This chicken is part of a meal I feel great about serving my husband and kids. It means a lot to me, to know that the food on our plates, used to nourish our bodies and minds, was provided a humane and healthy life. That chicken, when combined with a wholesome and healthy diet, daily physical activity, sleep and sunshine will help make me and my family healthy, too. That chicken never required antibiotics because it was raised in such a healthy, low-stress, natural and uncrowded environment.

Contrast that image with the conventional poultry farm where thousands of chickens are packed into a barn and feed until, finally, one day, they get to see daylight for a bit on the way to the slaughterhouse. Oh, and the close quarters, feathers, dust and bird poop require antibiotics to keep the birds healthy during the ~8 weeks to mature the chicken to full size. The picture at the top of this blog contrasts these two different chicken raising methods.

Doesn’t it make sense? Animals that are healthy and have a good life are then consumed by us so that we can have a healthy and good life.

But really, is the bird that Aaron at Jodar Farms provides better than a bird I can just as easily (and for less money) pick up at a local grocery store? This was my question. A question I needed an answer to.

A quick, informal, observational study was in order. You just might be interested in my findings. I decided to compare a Jodar Farms chicken to a chicken purchased at a nearby grocery store. The conventional chicken was purchased fresh, the Jodar chicken was frozen and thawed.

Here is what the two birds looked like as I prepared to cook them. 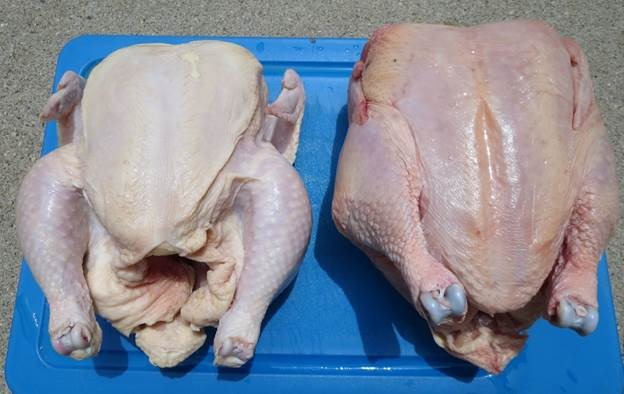 The raw chicken you see on the left is the conventional chicken. The chicken on the right is from Jodar farms. Do you notice any differences? I asked an agriculture expert at Colorado State University County Extension why the two birds look different. The extension agent said that the conventional chicken on the left has a thicker fat layer than the Jodar chicken. This could be the result of the Jodar chicken having the ability to run around and get more exercise. The color might also be related to the breed. Below you will find a summary table I made comparing some basic information about the two different chickens:

Is the extra cost worth it? The answer to this is complicate and based on economics (what each individual can afford), values (do I put my money toward a nicer car or daily coffee shop visits or increase my food budget?) and philosophy (how do I feel about current farming practices?). I have personally weighed the cost with the three issues mentioned and I have decided to increase my investment in quality food, which takes away from my ability to afford other things that I value less. I also want to vote with my food dollars on how I think our food system should operate to be more healthy and sustainable.

So, you will also notice that the chickens were raised differently. The conventional chicken package said “cage free.” According to the United States Department of Agriculture list of definitions a FREE RANGE or FREE ROAMING bird “has been allowed access to the outside.”1 In his book, The Omnivore’s Dilemma, Michael Pollan visited farms that touted being cage free and free range. His findings were that at cage free farms chickens only had to access to the outside for a short period of their lives; two weeks. He observed farmers who kept the birds enclosed in poultry barns until the last two weeks of their lives, when a small door at the end of the barn was opened during daylight hours. The chickens, (have you ever wondered why the work “chicken” is used to describe someone who is afraid?) who only knew how to live inside in confinement were too afraid to venture outside.2 So, even though the chickens were given the opportunity, eventually, in their short lives, to go outside, they did not. This begs the question, should grocery store labels really be allowed to say “cage free?”

Another important point to bring up is about the chicken livers. . . .

My mom and dad and grandparents grew up in an era where the whole chicken was valued and consumed. The organ meats such as the heart, liver and even gizzards were eaten. The carcass was turned into stock for flavorful and nutrient dense soups. Somehow, over time, the liver and other organs have become highly undesirable despite many health benefits. Liver, is low in Sodium and a good source of Thiamin, Zinc, Copper and Manganese, and a very good source of Protein, active Vitamin A, Vitamin C, Riboflavin, Niacin, Vitamin B6, Folate, Vitamin B12, Pantothenic Acid, Iron, Phosphorus and Selenium.3 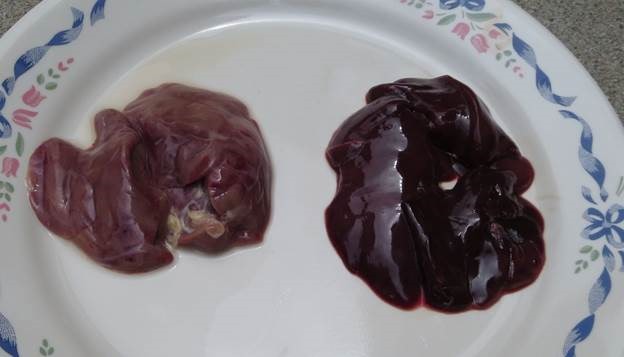 Wow, a picture speaks a thousand words! Did you know that the primary job of the liver is to detoxify the body? I wanted to add another picture for you of a human liver with non-alcoholic fatty liver disease, but I fear I would risk grossing out too many people. You can look this up on your own if you want. The liver on the left, from the conventional chicken does not look healthy, in fact, it looks diseased. You might even say it looks overworked, tired and toxic compared to the vibrant and healthy liver from the pastured chicken on the right.

The Liver Comparison: (this font color is the color of a healthy liver!)

So, if a picture is worth a thousand words I could just stop writing here, but you might be interested to know that chickens are omnivores; they eat both plants and animals. Chickens, by nature adore bugs, worms, grubs and meat in addition to fresh grass, grains, flowers, and my kale patch. Did you know that one remedy for ailing chickens is to feed them liver, even chicken liver, to boost their immune system and provide them with extra protein during stressful times such as during their yearly molt. Organ meat such as chicken liver is so nutrient dense, IF IT IS A HEALTHY LIVER as you can see above.

Now I will admit that I have had to work to acquire a taste for chicken liver. I will only eat and feed my family healthy chicken livers from healthy chickens that were given a natural and healthy chicken life. I know I overused the word healthy but I really want to stress that word! If we are what we eat, then we need to eat good food in order to be . . . . . . healthy. I have a dietitian friend who helped me overcome my distaste for liver. My husband helped, too. My friend Louise gave me this recipe for liver called Rumaki that you can try. My husband, Craig, fry’s chicken livers with sweet onions in a little coconut or palm oil and I like then prepared that way, too. We eat chicken livers about once every week or so. I hope you will get some livers from your local farmers, try cooking them and then share your successes below in the comments section.

How were the chickens prepared?

I slow-cooked them. I usually will roast a chicken, but I wanted the cooking method to be identical and I wanted to compare the broth so I stewed each chicken in my crock pot with my standard slow-cooked chicken recipe. You can find it HERE. It includes a broth recipe. I can’t end this article without mentioning the broth. See the picture below. I leave you to decide . . . . . which broth would you like to sip or use in soup? Have you come to a conclusion about which chicken you would like to eat?

What about the broth?

The story is not quite over. Aron is an awesome farmer. He believes in full disclosure. If you happen to live in Northern Colorado, he and his family openly invite any potential or current customer to drive up the road to visit and tour the farm and even help out on chicken processing day. They raise and provide the best turkey’s and pork, too!

I have since moved to the Kansas City area and had to find a new excellent source of chicken. Right upon arriving here I went to work finding great chicken farmers. I buy my chicken from Bauman’s Cedar Valley Farm and Schenker Family Farms. I pay more for this farm-raised chicken, but I believe it is worth it. I value supporting local food, local farmers and healthy food!

I would really like to hear your thoughts and comments on this topic. Please leave a comment below!

3. Source: Nutrient data for this listing was provided by USDA SR-21

I wanted the cooking method to be identical and I wanted to compare the broth so I stewed each chicken in my crock pot with my standard broth recipe:

Place all ingredients in the crock pot and cook on high for 2 hours, then reduce heat to low and continue to cook for 5-7 more hours until a cooking thermometer, when inserted into the meat registers at least 165 degrees.

Save the broth; let it cool, strain it and use it for soup with the leftover chicken meat. Store the leftover broth in a glass canning jar in the fridge. Label it with the date and use within 5 days.